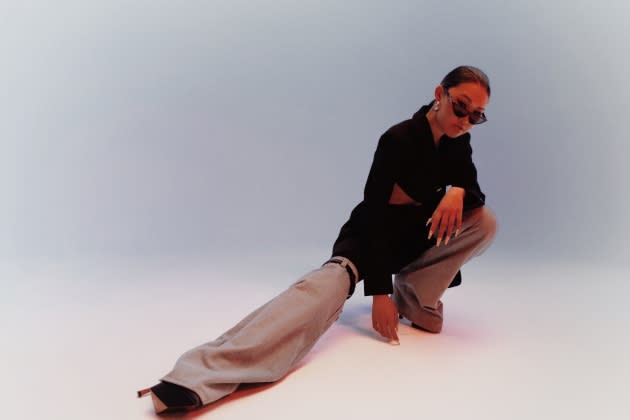 Jaime Xie is making her presence known, both in the fashion world and on “Bling Empire.”

The socialite-heiress, who is the eldest scion of tech billionaire Ken Xie, has made waves as of late, making her rounds in the fashion week circuit in Paris and Milan while also establishing a name for herself on the Netflix reality series.

While her appearances in the first season of “Bling Empire” were limited due to scheduling conflicts, the 24-year-old says viewers can expect a lot more from her in the new season, which premiered Friday.

“[Season two will have] lots of outfits and a lot more fashion, nails, hair and everything,” Xie told WWD. “I had a lot of fun filming. Also because of COVID[-19], there was no traveling.”

Though it seems like Xie was born to thrive in the fashion industry, attending runway shows like Balenciaga, Alexandre Vauthier, Balmain, Versace, Off-White, Schiaparelli and others, she admitted she only recently became more involved in it.

Throughout most of her life, Xie was preoccupied with her equestrian career, traveling nationally for tournaments and competing with the likes of Eve Jobs, the daughter of the late Steve Jobs. She had been attending fashion shows since she was 17, but was still figuring out exactly what she wanted to do for a career.

Then she realized she loved fashion more than she loved horses.

“It just became my everything,” Xie said. “I got obsessed with looking at pictures online, back when it was called Style.com or Vogue Runway and all those things. Instagram was just becoming a thing and I just loved looking at collections and clothes. I was looking for all the fashion weeks, everything.”

Xie’s penchant for fashion is reflected in the second season of “Bling Empire,” in which many of its cast members did not seem to hold back when it came to dressing up. Some of her favorite looks include a bright green-and-blue ruffled two-piece set by Tomo Koizumi (which she also wore to the 2021 Art+Film Gala at LACMA) and a neon orange velvet dress by Christopher John Rogers that she paired with neon green Amina Muaddi heels and a micro Fendi bag.

Despite her favorite outfits being vibrant, Xie actually describes her go-to style as rather the opposite, though she loves both sides of the color spectrum. What she tends to wear merely depends on her mood.

“I love Rick Owens, Balenciaga and Mugler — they’re my favorite brands right now. Those pieces lean toward the darker and edgier side,” Xie said. “Though I feel comfortable wearing anything and everything I think looks good on me. I don’t like to put myself in a box. I just like to wear whatever looks cool. That is definitely more toward the edgier, maybe not necessarily dark, but just weird, funky stuff at times.”

Though she likes the big luxury fashion houses, she also loves pieces from more emerging designers, such as Masha Popova, Didu, Lēo, Kimhekim and Ottolinger, among others, which she wore plenty of on the show’s second season.

“I’m very into the pieces that are special or just different. Not stuff you would see at Neiman’s or something, you know,” Xie said.

The heiress, who styles herself for the show and has done so her whole life, also mentioned she incorporated vintage pieces in her outfits this season. Searching for good vintage online was a hobby she picked up during the pandemic lockdown, browsing through sites such as Vestiaire Collection, The RealReal and eBay.

Like the other cast members on “Bling Empire,” Xie is meaningful with her outfits, reflecting not only her personality but also the importance of having fun when it comes to clothing and putting them together.

“I hope people can see that fashion is fun,” Xie said. “I think it’s also important to know how to style properly. But I think it’s important to just wear what makes you feel good and look good, and that can be a very different variety of things.”

When “Bling Empire” premiered on Netflix last year, the reality television series made waves for its all-Asian cast, their over-the-top luxurious lives in Los Angeles as well as dramatic plot lines and fashion, with some viewers drawing comparisons to the 2018 hit romantic comedy “Crazy Rich Asians.”

‘Bling Empire’ Could Be Fashion’s Next Reality Show Crush

Makeup Tips in This Monsoon

Brandy Gives Us Style Goals In A Pink Aliette Dress